Supramolecular synthons, structural units that contain all geometrical and chemical information inherent to the phenomenon of primary recognition between functional groups, are of great significance in crystal engineering. Heterosynthons hold a position of special importance among them because they provide a predictive justification, in terms of unique intermolecular interactions, as to why two molecules should co-crystallize. As supramolecular synthons grow in significance and usefulness with the advent of high throughput crystallization and screening methods, the need is felt for their identification with a method that is simple, accurate and not as time, cost and labor-intensive as Single Crystal X-ray Diffraction (SCXRD) or Powder X-ray Diffraction (PXRD). When it comes to choosing a technique for synthon identification that is comparatively cheap, easy to use and ubiquitous in its availability, IR spectroscopy seems to be the natural choice. Using this concept we have developed an ‘IR-marker’ method for simultaneous identification of multiple H-bonded synthons and their transferability has also been probed. In the most recent study, we have been able to distinguish topological and geometrical variations, which is a more challenging goal, in the same halogen bonded synthon by means of ‘Graded IR filter’. We have developed a four-step strategy for identifying supramolecular synthons using IR spectroscopy, outlined in the scheme below: 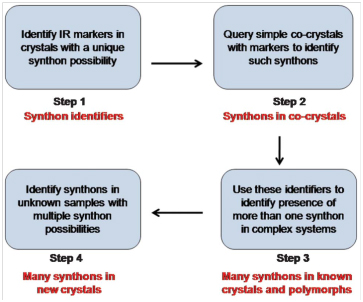 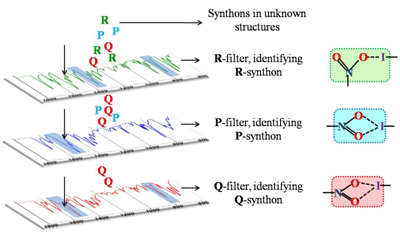